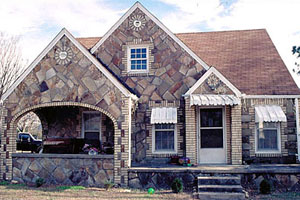 Mixed masonry reflects a style that was predominately built from the late 1930s through the mid-1950s in central Arkansas and areas of the state close to the Missouri, Texas and Oklahoma borders.

The name Silas Owens, Sr. has become ubiquitous throughout central Arkansas and surrounding areas, and synonymous with quality, integrity and — most importantly — mixed masonry design. Now, decades after his creations were completed, Owens' work has received historical preservation designation by the Arkansas Historic Preservation Program.

The History of Mixed Masonry
Mixed masonry is a term coined by the Arkansas Historic Preservation Program and reflects a style that was predominately built from the late 1930s through the mid-1950s in central Arkansas and areas of the state close to the Missouri, Texas and Oklahoma borders. This mixed masonry method was comprised of using cream brick trim with cut sandstone and cut limestone. At times, these materials were paired with red brick and even crystals.

"It's just a term that we made up," said Holly Hope, special projects historian with the Arkansas Historic Preservation Program and author of "A Storm Couldn't Tear Them Down," which describes the mixed masonry work of Silas Owens Sr. from 1938-1955. "When I interviewed masons who had done this style of house they said, 'We just always called it a rock house.' Through the Historic Preservation Program, it just always seemed like there needed to be an architectural designation for it, because it is very unique. When I describe it to people, I usually tell them that it's sandstone or limestone with brick trim around the windows, doors and porches, primarily."


Early Beginnings
Born in 1907, Owens established his early beginnings working with his father on the family farm. Although he was an African American living in segregated society, Owens was able to achieve an education up to the eighth grade. He then turned to the construction industry to begin his trade.

While he had formal training in drafting and carpentry, his masonry skills were primarily self-taught. At the time, he did not have a car, so he hauled materials with the help of a donkey. He is said to have helped construct his first building — the reptile and elephant house at Little Rock Zoo — while in his late 20s. Owens then began to work around Faulkner County and any areas that were easily accessible to him.

The mixed masonry method was comprised of using cream brick trim with cut sandstone and cut limestone.
Making a Name for Himself
While Owens wasn't the only contractor to construct mixed masonry buildings, his work certainly stood out and was unique in its own way.

"He used a herringbone pattern, which is just absolutely meticulous work," Hope said. "When you look at it up close, there are hardly ever any cracks. The mortar is just perfect; there's none on the stones. He had to choose just the right stones to put in. It's really almost artistic when you get up and look at it."

Hope said that another unique characteristic of Owens' signature style was arcaded porches and round shoulders on chimneys. The houses built in the late '30s and '40s had a lot of arcades, paired windows and almost always had a porch on them.

In her paper "A Storm Couldn't Tear Them Down," Hope wrote that, "Cream brick trim was a defining feature of the Silas Owens Sr. mixed masonry. The standard size of the modular brick used was 4" x 2-2/3" x 8". Sometimes they were wire cut with a striated design or with a mottled face, and in some cases they were smooth faced. Brick would be obtained from Malvern, Hope, Conway or Morrilton, and often the Hiegel Lumber Company in Conway would deliver the bricks to the site. Common areas of brick placement were on window and door surrounds, louvers, at all corners of the building and outlining the arches and piers of the porch and the shoulders and throat of the chimney."


What Historical Preservation Means
More than 20 of Owens' buildings have reached historical preservation status, according to the Arkansas Historic Preservation Program. What does this mean? "It's really just an honorary designation," Hope said. "[His buildings] are listed on the National Register. It provides them with recognition through the National Parks Service as a historic building, and they have merit because of their architectural design. In this case, with the context, they have merit if they're constructed by Silas Owens Sr. because of their connection with him."

Kate Parrott was a Managing Editor at Lionheart Publishing including Assistant Editor for Masonry magazine.

Reclaiming Chicagoâ€™s Past Through Recycled Materials