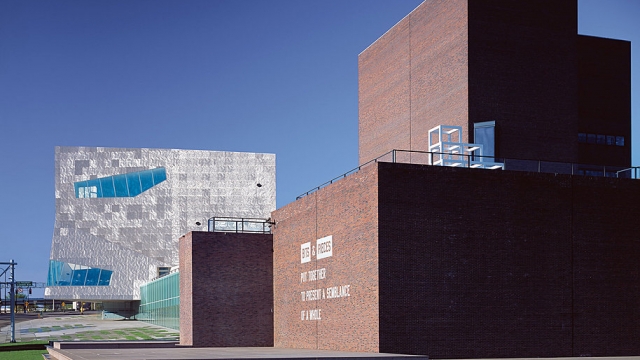 The brick façade of the Walker Art Center’s Barnes Building needed extensive repair due to its deterioration over the past 40 years. Originally constructed in 1971, the facility consisted of brick mortared directly to the concrete masonry unit backup wall with no horizontal or vertical control joints. This ultimately led to issues throughout the building.

The primary goal for this project was to maintain the appearance and integrity of the building, while constructing a masonry wall cavity using today's industry standards. To preserve the facility’s appearance while adding control joints, the team designed the outside corners with two quirk-miter bricks. This kept the control joint hidden, as opposed to being inset from the corner as typical with most walls.

Prior to the brick replacement the Walker had difficulty maintaining the required humidity levels for an art museum because the envelope was not properly sealed. Adding the air and water barrier membrane and insulation in the wall cavity resolved this issue. The new insulation improved the museum's climate control and energy efficiency, while new vapor barriers will extend the life of the exterior brick.

The project was constructed using scaffold systems surrounding the outside of the building. Complex sequencing was needed, due to the verticality of the project and the multiple trades needed during remedial work. The tallest scaffold system was nearly 100 feet high so temporary protection was installed intermittently throughout the scaffold system to allow for the trades to complete multiple phases of work occurring concurrently.

The Walker Art Center remained open throughout the construction process, with limited impact on public access to exhibits and events. Since the existing backup wall did not have an air and vapor barrier, it was critical that the building be protected from the elements to prevent any moisture within the exhibit space. An enclosure was installed around the outside of the scaffold system to provide the necessary protection.

Disruption avoidance was extremely important on this project. The Walker provided Mortenson an event schedule each week so the team could coordinate the noisier work around events. Demolition activities also concluded each day by noon to minimize disruption within the exhibits and to staff. Additionally, the project was strategically planned in two phases to accommodate "Rock the Garden," one of the Walker's biggest annual events. This required a full demobilization from the site (including jersey barriers, site fence, equipment, office trailers, staging and materials, and a full site restoration). The project remobilized for Phase 2 immediately following the event.