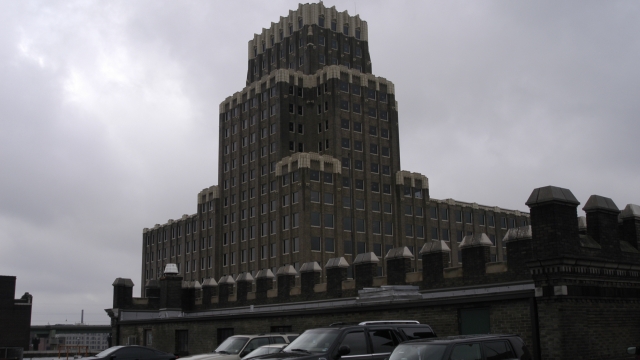 The project was the Robert A. Young building better known as the Mart. The building was designed by architect Preston Bradshaw and built in 1931 in the “Art Deco” style. The building is owned by the General Services Administration division of the Federal Government. Some of the offices in this building belong to the FBI, OSHA, DNR and the IRS, not to forget Homeland Security and Immigration.

Before beginning work, Superior Waterproofing & Restoration (subcontractor for Hof Construction), cut out the window heads to check the steel lintels, examined the terra cotta and the condition of the brick. In April 2010 work on the project began. The scope of work included 100% tuckpointing of the walls to a depth of ¾”, inspected and mortared; light washing of the facades; replacing and reflashing all of the steel lintels; installing helical anchors and seismic pinning; and rebuilding all of the parapets and corners.

Two weeks into the job the work on the building was too noisy for the office occupants and the entire work schedule had to be switched to nights. This presented problems with lighting, suppliers, equipment repairs and safety, because work was being performed by two shifts between 3pm and 7 am. Working Downtown St. Louis also presented it’s share of problems. Parking around the building was non-existent, no loading zone for deliveries, and very little storage room. Workers parked in a public garage a few blocks away and most of the storage had to be contained on the 11th floor.

Superior used frame scaffolding above the 11th floor and Mast Climbers for the lower levels. The scaffolding was enclosed and special vacuuming systems were installed to control the dust and debris from the grinders and chipping hammers. Each Mast climber had two platforms working in tandem to increase productivity. Some of the mast climbers had to be supported on chair stands to keep the units above low-level roofs. Each climber was fitted with its own portable restroom. Each shift had approximately forty workers. All work was performed by Bricklayers Local #1 of Missouri and Masons from the Eastern Missouri District Council.

In an effort to match the remaining brick on the building, Superior was able to locate similar brick on a building being torn down in Iowa. These bricks were stained and blended to match the existing brick. All of the Terra Cotta on the building was replaced as repairs were not possible because the original work was mortared instead of anchored.

Work was completed the first of May 2012.

Date of Project Completion: May 2012

“Joining the MCAA will pay off instantly as all their tools will be available to you.”