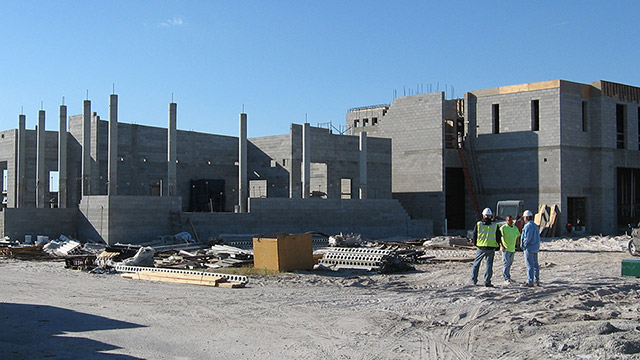 Located on a barrier island in Northwest Florida, this site is characterized by white rolling sand dunes with sea oats on the south side of the site transitioning to a coniferous long leaf pine forest to the north. To the west the site shares a residential street with two and three story houses. Directly east and adjacent to the site is a national park. Directly to the south is a coastal highway and beyond, the Gulf of Mexico. North of the site is a section of the national park and a short distance beyond the park is a waterway referred to as a sound.

The project is a replacement to an existing fire station and visitor’s information center. Challenged by a low elevation from sea level, the existing structures had been victim to more than one storm surge from various hurricanes. This presented the area residents with a challenge in that each time a hurricane struck the island, they were left without adequate emergency response services due to the damages to the fire station. Thus the new fire station and visitor’s center would need to be elevated out of the surge zone and well above the flood plain. In addition, the project would include a much needed community room to provide space for safety training, community meetings and a place for organizing emergency responses. Additionally the station would feature a helicopter pad to allow for airborne services should the coastal highway be cut off. The new project had the challenge of combining the fire services with the very public visitor’s information center. Thus the plan for the project divided the site into a “public zone” fronting the Highway and a “private or working zone” to the north side of the site. Given that the site sits at the end of the state park and acts as the gateway to the residential and vacation community, the building also needed to respond to a civic role with a welcoming expression. The materials in the project were chosen for their durability and relationship to the coastal environment. Lightweight concrete masonry was selected for the strength of masonry and the improved productivity and workmanship resulting from using lightweight units. The lightweight units also offered lower transportation cost from the manufacturing facility more than 130 miles away. The project has been awarded a LEED Silver rating from the USGBC.

13,539 square feet of lightweight units were used in this project.