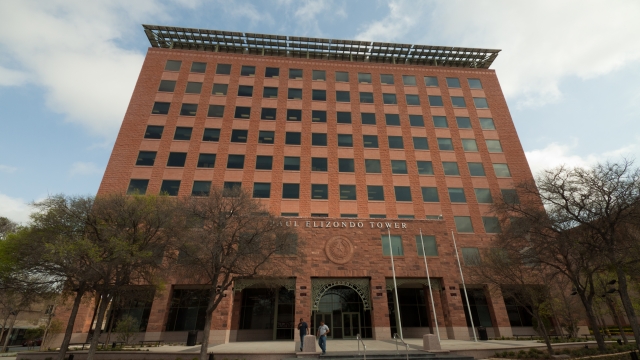 The Paul Elizondo Tower is an 11-story, 232,000 square foot office addition to the Bexar County Cadena Reeves Justice Center. The project site is located adjacent to Bexar County’s prized County Courthouse, a historic structure designed by renowned Architect James Riely Gordon and completed in 1897. The historic courthouse has load bearing masonry walls over 5 feet thick at their base and is adorned with ornate carved stone detail throughout. It was the inspiration for the subsequent Cadena Reeves Justice Center completed in 1988, and further inspired the masonry materials and details of the Paul Elizondo Tower Addition.

In fact, the greatest challenges to the success of the masonry on this project all stem from its proximity and association with the historic Bexar County Courthouse. The tower’s humble beginnings as an economical office building had to be balanced against the timeless elegance and detailed ornament of its neighbors. The Paul Elizondo Tower was clad in thin 2” pink granite panels and Pecos Red Sandstone veneer at the base and full-bed Arriscraft Stone units on the upper nine floors, yet all of the veneer masonry details, especially those at window and door conditions, were designed to mimic the look of load bearing masonry. The joint pattern of the masonry veneer was also adjusted from a standard running bond arrangement proposed in the conceptual design to a more intricate pattern which related to the Romanesque Revival Style of the adjacent courthouse.

The primary site work on the tower is masonry. The front plaza is a large elliptical form outlined in low granite retaining walls, ramps, and stairs which complement the simple rectangular building form. The tower was always intended to be LEED certified. From its inception the design build team labored to find new ways to be environmentally conscious. A significant quantity of the demolition debris from the project came in the form of large blocks of pecos red sandstone removed from the existing building’ veneer to make way for the tower addition. The mason incorporated this material in planter benches in a recessed courtyard between the two structures. Scraps of the new sandstone veneer were used in a similar manner to reduce demolition debris and related transportation costs. This sunken courtyard had been a part of the original Justice Center, and was decorated in carved stone relief by renowned Dallas sculptor Sandy Stein. She labored for over a year on ornamental accent bands and works of free-standing art which were disassembled and later restored by the masonry contractor for the tower addition.

The Paul Elizondo Tower includes a 10’ diameter seal of the County of Bexar set above the front entry. The high quality of the carved elements found on the newly restored courthouse became the standard of expectation for the work on the seal. The final product took over 6 months to carve and is comprised of 10 individual stone segments independently supported on the building’s steel frame. This seal not only greets each visitor who arrives at the tower, it stands as a testament to the craft of the masons who worked on the project.

“We can make a difference together and bring masonry back.”