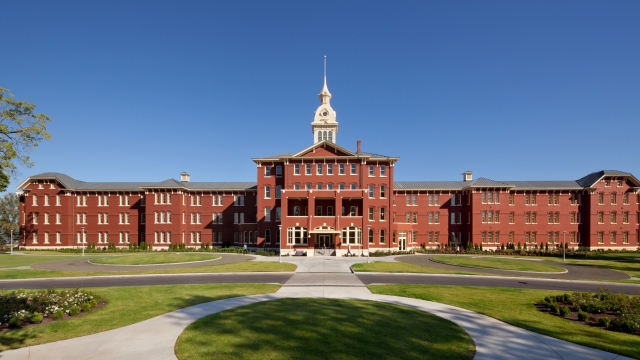 From the restoration of the Oregon State Hospital in Salem, the Kirkbride Building emerged as a stunning tribute to its namesake. Dr. Thomas Story Kirkbride was a founding member of the forerunner to the American Psychiatric Association. His 1880 publication On the Construction, Organization, and General Arrangements of Hospitals for the Insane influenced mental health treatment and prescribed design guidelines that were applied to the construction of over seventy "asylums" in thirty-one states across the nation. These facilities have come to be known as "Kirkbride Plan" buildings.

In May 1881, inmates from the adjacent Oregon State Penitentiary were pressed into service on the hospital property, hand-fabricating bricks likely molded from nearby clay and mud and finished in wood-fired clamp arrays. Through general labor and varied masonry skills, the inmates constructed the William F. Boothby design that includes a center pavilion and four residential wings totaling 163,250 SF. Noted Dr. Kirkbride in 1880, "The construction of the outer wall with an airspace between the courses of brick ... is an admirable arrangement for giving a perfectly dry house, and one little affected by sudden changes of temperature." Recent exploratory demolition at the Salem building revealed that the 40-foot-highexterior walls were four wythes of unreinforced load-bearing masonry with an air gap, and a single wythe of unreinforced masonry veneer. Many of the uncovered bricks bear hundred-year-old date stamps with the initials "O.S.P." to recognize the original inmate laborers.

Upkeep of historic buildings has long challenged state institutions, while treatment advances have also made the historic Kirkbride Plan layout obsolete. To meet modern patient care standards the Oregon State Legislature approved a master-plan analysis and construction of replacement facilities. In 2007 the design team arrived to find a building partially occupied by patients and administration offices, crowded with forgotten storage, abandoned to disuse, and harboring a great homed owl, with funds stretched between patient care and building maintenance. The facility appeared little changed, unless it was more dilapidated, in comparison to the 1975 filming for "One Flew Over the Cuckoo's Nest." As the design began to take shape, citizen volunteers rallied to support the historic Kirkbride Building. It had already been declared city of Salem local historic landmark in 1990. In August 2007, the community initiated the process that earned National Historic District designation for the Oregon State Hospital campus, thereby requiring that restoration would comply with the Secretary of Interior Standards.

A greater than 66,600 SF surface area of historic hand-fabricated bricks was treated for lead paint remediation, and fully covered in scaffolding to shield the surface from frost and rain while providing forced air heating when required. The restoration mason raked the joints using air-powered saws and diamond cutting blades, while more delicate work was performed by hand using hammer and other tools to avoid damage to adjacent bricks in stable condition. A parge coating had been originally applied at the masonry foundation, window heads, windowsills and decorative banding. Restoration masons tested the soundness of the parge with a "Schmidt Hammer" and selective removal was completed by hand.

According to Dr. Kirkbride, "A hospital should be constructed of stone or brick, as may be found convenient and economical. If of good brick, the walls require nothing, but they may be painted to give them an agreeable shade of color."Since the Salem brick was molded from on-site soils, the quality was more limited than masonry fabricated from optimal materials. The soft historic bricks could not tolerate surface exposure to the elements, and had been painted early in the building’s life to enhance the weather resistance. Seeking to honor the building's original character, the design team utilized chromo chronologies to identify the original pennywise paint color. The new custom-blended paint hue represents a compromise between this historic tone and the contemporary unpainted brick chosen for the adjacent new addition.

The Oregon State Hospital is the oldest continuously operating psychiatric hospital building (of any design model) on the West coast. It is one of the few Kirkbrides in the nation that is not only occupied, but in use as a health facility. The meticulous brick restoration, along with a structural seismic upgrade, historic reroofing, restoration of the original windows, and rehabilitation of the cupola, reestablishes the glory of this landmark building. The 19th-century masons and unskilled inmate-laborers could little have imagined that the Kirkbride would form their legacy, that it would receive highly skilled professional restoration, and that it would stand beautifully over 125 years later to provide state-of-the mental health care.