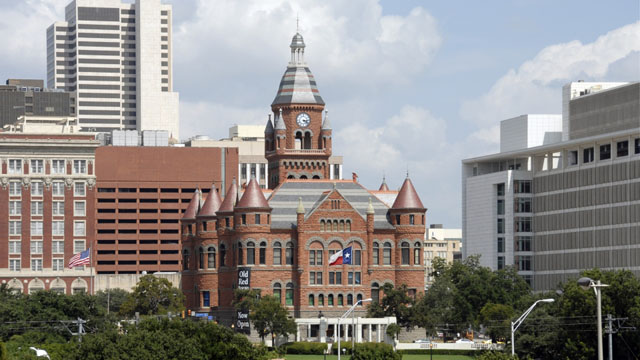 The Old Red Courthouse was constructed in the 1890’s, and was built at a location which was then the center of Dallas. The current building, in fact, replaced four prior courthouses which had consecutively resided at the same location. Construction of Old Red is in the Richardson Romanesque style, a style often seen from the late 1890’s boom of Texas courthouse building. The courthouse was constructed with structural elements of masonry and cubic stone. These materials were used not only because it was the style of the time, but also as a precaution to fire which had claimed prior courthouses.

Old Red has since been a historic landmark for Dallas County and through its lifetime has served numerous civic functions from weddings to alleged hangings. It currently sits in a largely restored state, and houses the Old Red Museum. Original 1890’s construction included a substantial bell tower atop the building. It was 90 feet tall, and was constructed of cubic sandstone and granite. Shortly after construction, it became evident that the buildings structure was incapable of supporting the bell towers cubic stone configuration and associated weight. It was feared that catastrophic structural failure could follow, so the bell tower was dismantled down to its base in 1919.

Time passed, and in the 1990’s a movement to restore Old Red began. There was a strong consensus that the building could not be restored to its full glory without the presence of the bell tower, which was perhaps the building’s most prominent architectural design element. Restoration was ultimately planned and undertaken by phase. The final phase would reconstruct the bell tower.

Modern construction and engineering allowed the new bell tower to be supported by a steel structure, eliminating the source of the original bell towers structural problems. Research, numerous quarry visits, and extensive material samplings were undertaken to match original stone material types. Stone materials utilized included Torrey sandstone and Vermillion and Morning Mist granites, which served to replace the original no longer quarried stone material types. In the end the stone materials utilized proved a close match to the original stone types. As with the original materials, stone was fabricated in cubic through-wall pieces with hand-pitched faces. It was laid in largely the same fashion as in the 1890’s, a method of construction now seldom seen. Connections, however, tied stone to the structure by means of modern job-specific stainless steel anchors. Also, use of cranes greatly added to the ease and precision of placing stones at their installation points.

Stone erection was completed to the bell tower in 2007, effectively reconstructing the crowning feature of the building after a near 90 year absence. A tabulation yielded 3,700 pieces and approximately 5,500 cubic feet of sandstone and granite utilized.

“The MCAA is truly trying to move the masonry industry forward.”