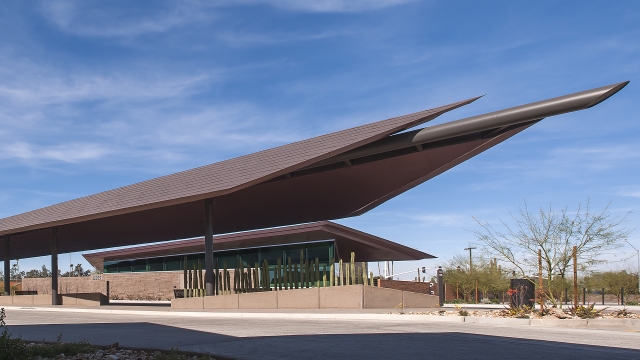 The North Scottsdale Park and Ride is located on a 5.8 acre reclaimed site located south of the Scottsdale Airport, at the end of an active runway. The theme of the Park and Ride is that of Transportation - mainly aviation, given its proximity to the Airport. The Central Passenger Platform Canopy is an aviation-themed landmark, a great sloping wing positioned in such a way that it appears poised for takeoff down the runway. The canopy’s graceful form is an abstracted ‘Thunderbird’, a mythical creature depicted as a large, powerful bird. The site’s self-shading, CMU patterned walls help reduce the heat island effect and provide an ever-changing shadow pattern that was designed to resemble the interweaving pattern of a “nest”. The passenger platform’s main column shape and rough, natural stone texture implies the Thunderbird’s leg and talon.