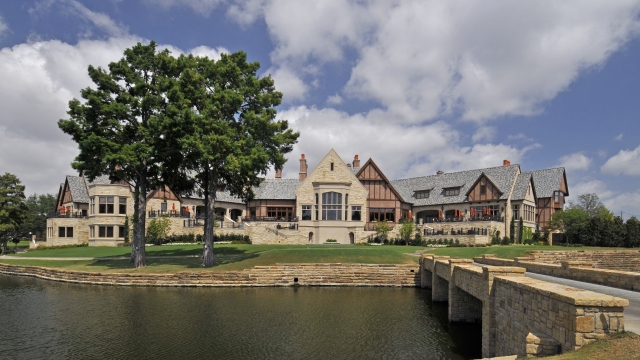 The new design encompasses elegance and charm, with a cue towards old-world European architecture. This design utilizes heavily the elements of stone and masonry at the exterior as well as the interior. In no way is the design standardized or monotonous, with every exterior elevation varying from the next, and with every room being unique in character. To be sure, only the finest material selections were entertained.

The building relies mainly on masonry for its exterior. Rock veneers laid in mortar cover a majority of the vertical exterior surfaces. Cast stone, in too many configurations to count, forms all of the trim elements as well as feature paneled areas. Full depth brick veneer is utilized in varying patterns, as well as thin brick veneers in latex mastic between stained wood trim elements of the gables. The numerous all-masonry fireplaces proved to be the equivalent of their own project. They form focal points to distinguish the roofline, with circular brick-clad flues that demanded the highest level of craftsmanship.

The building’s interior utilizes stone and masonry finishes throughout. Fireplaces form the focal points of many rooms through their use of ornate stone surrounds and hearths. Vaulted corridors are accented with unique lightweight cast stone trim at the creases of the arches, and the dining room displays a back-lit barrel-vaulted stone soffit directly above the length of the enormous dining table.

Cut-to-size marble and granites also occur throughout the building in varied forms at staircases, bar tops, lavatories, and as flooring.

The magnitude and complex nature of the work led to numerous challenges during the planning as well as construction stages of the project. Eventually an on-site layout engineer was employed to field-verify measurements for materials under fabrication. All told the finished stone and masonry elements totaled in excess of 130,000 square feet, with on-site erection spanning over a 24 month timeframe.