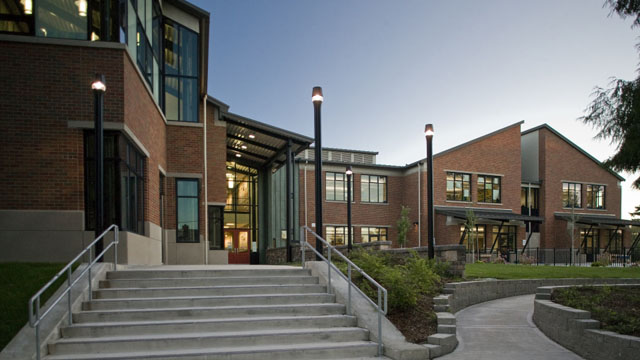 The site is in an older, established residential neighborhood. Surrounded by streets and houses on all sides; the site itself is largely flat but slopes down on its western edge. Views of the Olympic Mountains exist to the west.

A 67,000 s.f. kindergarten through 6th grade elementary school consisting of classrooms, a library, administrative spaces, and a multi-use activities wing. The client requested a traditional academic expression which maximizes open area on the site.

A compact, 2-story footprint hugs the northwest corner of the site in order to maximize outside play space. The facility is organized around a central, 2-story circulation spine running in the north-south direction. Shared and public spaces lie to the east of the spine while classroom clusters lie to the west. The library is on the upper floor and is situated and designed to enjoy views of the Olympic Mountains to the west.

Cedarhurst was conceived as a brick masonry building early in the design process and was ultimately selected for several reasons: The unique color and pattern of the masonry is achieved through a blend of three standard colors combined with a precast base, precast trim and copper color metal siding. Additionally, a low stone wall which runs the length of the circulation spine offers a visual complement and counterpoint to the brick masonry building.