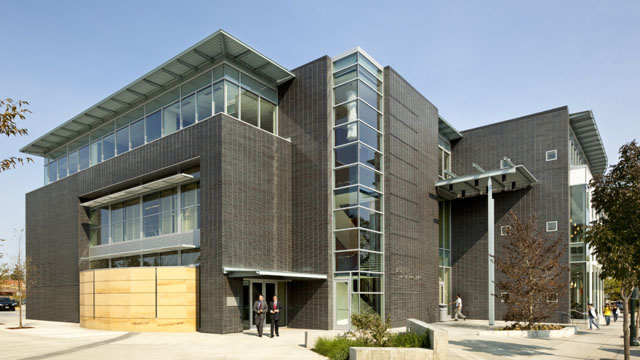 As a catalyst for the revitalization of downtown Burien and the heart of the 6-parcel Town Square development, the 58,000 square foot building of masonry, natural stone, glass, and metal provides a flagship regional library for the King County Library System on the lower two floors and a new City Hall for the City of Burien on the upper floor.

The catalyst for the revitalization of downtown Burien, and the centerpiece of the Town Square development, is the new Burien Library and City Hall, a single building that accommodates a flagship regional library for the King County Library System (KCLS) and a new City Hall for the City of Burien. The establishment of this civic icon is the result of a unique collaborative partnership between KCLS and the City of Burien resulting in a premier library to serve their South King County patrons and a new state-of-the-art City Hall for the City of Burien to better serve their constituents.

The overarching design principle is dignity with transparency – to create a sense of open government and open access to knowledge. The design seeks to create a sense of civic importance and monumentality with a spirit of intimacy that is unique to the Burien community, as well as project a distinct identity for the two participating institutions. This identity is expressed in brick, natural stone, and large planes of glass to publicize the activities within and to integrate seamlessly into its context. The Library and City Hall distinguishes itself with simplicity and the elegant detailing of both the masonry and the signature south curtain wall that capitalizes on the unique light conditions of the Pacific Northwest and frames views to Mount Rainier.

The building lobby provides access to separate and distinct entries for each of the building’s occupants. The formal library entrance is along the east wall of the lobby. Access to the City Hall on third floor is on the west wall via a dedicated elevator and a gracious open stair visible to the exterior of the building. The lobby also provides access to several shared program components, including the Council Chambers, public restrooms, and a coffee lounge. The Council Chambers are located adjacent to the public park and incorporates large doors and windows to establish a strong visual and physical connection to the park and act as an ancillary venue for civic activities. The lobby features an artist designed terrazzo floor, cast glass windows at the Council Chambers, and natural wood-paneled walls. The lobby and library interior incorporates bright colors, animated surfaces, and high ceilings that will be illuminated at night to create a civic lantern establishing a sense of excitement along the downtown main street.

The building incorporates a number of sustainable strategies such as co-location of institutional functions, high efficiency mechanical and electrical systems, a reflective roof, utilization of finish materials with high recycled content, and low-emitting paints and carpets.

The project opened in the fall of 2009 and is on target to achieve silver LEED certification.

“Through the MCAA’s webinars we’re able to keep current in our industry.”