MCAA in the news 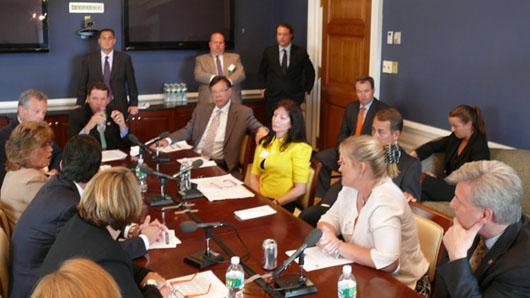 “We’d like to see an atmosphere out of Washington that says let’s help the small businessman, not an atmosphere that says we have to pay for something ... let’s hit small business,” said Steve Rosenfield of Westminster, Colo., who owns 50 Carl’s Jr. chain restaurants with one partner and 21 more with a second partner. Westminster lies in the 2nd Congressional District represented by Rep. Jared Polis , who’s been a leader among Democratic freshmen in raising concerns about a proposed surtax that would help fund the overhaul with $544 billion in revenue.

Tuesday’s roundtable event came as Republicans pushed back aggressively at Democrats who are struggling to amass enough support in the House Energy and Commerce Committee to report out the health bill. Republicans for days have been attacking the proposed surtax for its impact on small businesses because many business owners report their profits on their individual income tax forms. However, business income represents less than a third of the money affected by the surtax.

Business owners are also unhappy about a provision in the bill that most larger employers provide insurance to their workers or pay a penalty. Beverly McCauley of Fairfax, Va., who works for a family-owned construction company, said the firm now pays about $300,000 for employee health care and about 40 percent of workers participate. Those who don’t choose to enroll are often sending money overseas, she said. “If we fail to exist, we not only fail to exist, we take a tremendous amount of our suppliers with us,” said McCauley.

“There are a number of our members who have been in informal conversations with the Blue Dogs,” said House Minority Leader John A. Boehner , R-Ohio, at the roundtable. “We’ve been hoping for weeks that they’d become a bit more formal. I think the American people want us to work together to solve this health care crisis and I’ve encouraged our members to reach out to their friends across the aisle and see if we can’t put a bipartisan solution together.”

Republican Whip Eric Cantor of Virginia said there’s now “bipartisan opposition” to the president and House Democrats’ proposal. “When we say a surtax on those making over $200,000 a year will hurt job creation, these are the individuals that derive their income from small businesses that will have now added costs to hiring anyone,” Cantor said of the small-business owners.

Democrats, however, contend that small businesses will benefit from their plan. Small-business owners and their workers account for the largest share of the uninsured, and without an overhaul, health care costs for small businesses will continue to rise, they say. Additionally, 76 percent of all employers — those with payrolls of $250,000 or less — would be exempt from the employer mandate to provide coverage. By creating a larger pool to spread out insurance risk, the Democrats say their plan will lower costs and increase insurance options.

Jane Norman is a journalist in the Washington D.C. metro area and Associate Editor for CQ HealthBeat at Congressional Quarterly.

The Easiest New Year’s Resolution You Could Ever Make!