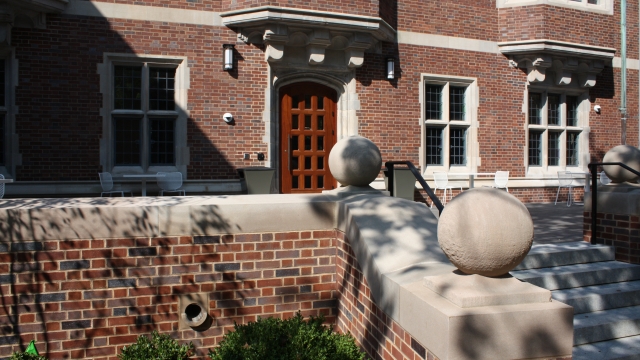 The Alumni Hall was such an extensive and refined project wanting to keep its original gothic style as well as its ornate details. Hardaway Construction and WASCO, Inc. saw many obstacles throughout. Not only did each company have to work with and around the richly detailed exterior, classic Tudor Revival doorways and windows, gabled wings, among other details to retain its authenticity, Hardaway, WASCO and other contractors also had to work around college life. As we all know construction normally starts at the break of dawn, however, on the Vanderbilt campus no noise could be made until after 8:00 am so as not to bother the students, this went throughout the school year. Fragility, students and noise were not the only obstacles placed in these companies path; location, parking, and the landscaping were among the top.

Alumni Hall was conveniently constructed at the center of the Vanderbilt University campus to bring its populace together. Convenient for students and faculty, not for construction companies, this meant no roads to the center of campus. So a make shift road was created for the renovation of this building, not just for WASCO, but for Hardaway and every construction company and contractor who was part of that job. One teeny tiny path for transportation of large trucks, equipment trucks, supplies, and workers. Working with such large objects also posed a problem for the landscaping, not to scratch the historic trees and plants surrounding the gothic building, if they did they would have been fined, but they managed! Parking posed yet another problem for the constructors of The Alumni Hall. A large majority of the nearest parking lots were being used to house all the equipment needed for the renovations, so workers had to find other places to park, along with everyone else attending Vanderbilt University, yet again Hardaway and WASCO managed.

Another obstacle, WASCO overcame, was the cleaning of the brick and stone, not the brick and stone itself but the drainage system surrounding the building. The exterior pipes were another antique feature that the university wanted to keep, once copper starts aging it turns a beautiful greenish color, with chemicals WASCO was using this color would be immediately stripped and be a shining copper. In order to avoid this each drain and copper piece was carefully covered and taped so no chemicals would come in contact with any of the copper drains, easily remedied, yet very time consuming.

WASCO, Inc. was very lucky to have received this project and be a part of history at Vanderbilt. To be able to look at the beautiful architecture of Alumni Hall and to fortify the originality of the gothic structure along with using many of the original bricks, blocks and windows has been an honor. This project was not just any restoration project, this was a building that was built almost a century ago and has now been successfully fortified for the next 100 years or more.

“Through the MCAA’s webinars we’re able to keep current in our industry.”