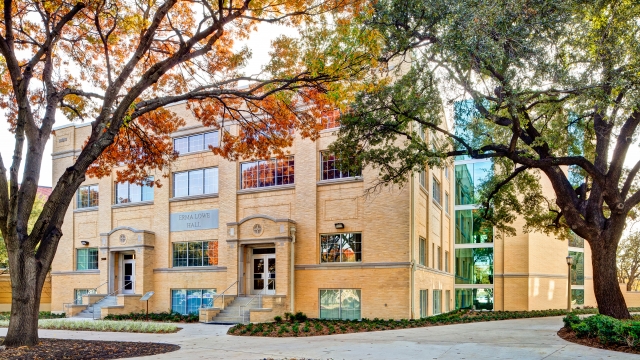 Design of the 35,000 square foot Erma Lowe Hall at Texas Christian University (TCU) takes inspiration from the campus’ prevailing Neo-Georgian architectural style. The use of TCU blonde masonry, simple masses and human-scaled elements further relate the architecture to its surrounding context. A major goal for this renovation and expansion was to create a new entrance at the northwest corner of the building that orients toward the main north-south pedestrian path and provides a clear formal entry and lobby for the building. This new formal entry creates a stronger presence for TCU’s acclaimed dance program.

Another primary goal of the design was to create a space for performing and rehearsal that felt like a real-world space rather than a “teaching” space. This was accomplished by taking inspiration from loft space used for rehearsals in New York City. The design was intended to inspire the students using the space to work to make it to the next level by making them feel as though they were already in that environment.

Erma Lowe Hall was originally built in the early 1920’s as TCU’s gymnasium and physical education building. It was later renovated in the 1970’s to accommodate the dance program. The current renovation and expansion makes the building fully ADA accessible and also greatly improves the overall functionality and aesthetics. The best example of these improvements is in the rehearsal and performance studio which can now be configured to allow for fully staged performances and recitals. To provide unobstructed sightlines in the main performance space (Studio B) two support columns were eliminated.

A new computer dance lab allows students and teachers to choreograph dances and monitor performance through the use of state of the art technology.

The facility has received its LEED Gold Certification and incorporates numerous sustainable features such as natural daylighting, low flow toilet fixtures, reuse of 75% of the original building and recycling of materials including brick. Brick removed during demolition was refurbished and reused.

“The mason contractors involved in the MCAA all work towards the same goals.”