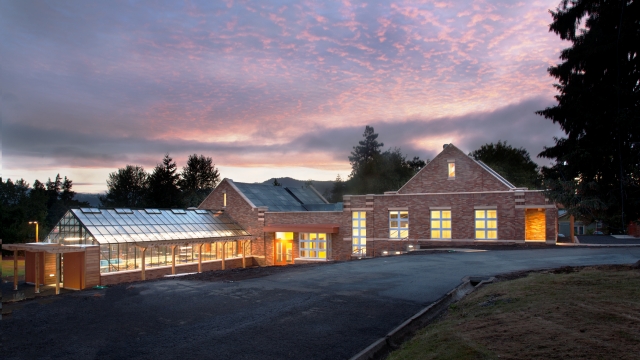 The exterior of the net-zero, LEED Platinum Music and Science Building at Hood River Middle School was designed to match the existing main school building, a national historic landmark built in 1927. Finding the right brick material, color and proportion was a long, but rewarding process. The original building's brick was rug cut; however, modern rug cut brick differed significantly in appearance, so wire cut brick was chosen instead. To match the proportion of the five colors used in the existing main building, Opsis architects counted within approximately 200 square feet of the original building's exterior, recording the number of bricks of each color by which to base their design. A higher proportion of darker bricks on the base of the Music and Science Building create a subtle design detail. Brick was also used as part of pilasters in a rotated soldier course at a 45-degree angle, creating texture and contrast. Precast concrete was also used on the project, including decorative precast concrete benches, parapet caps, windowsills and a large sundial above the main entrance.

“The amount of information that is at your finger tips is unbelievable.”